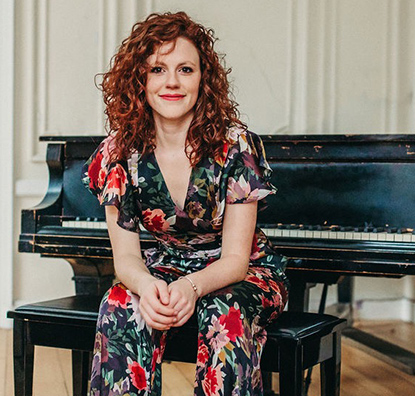 Replacing our Color Light Show, Ilana Cady will perform LIVE online via our Facebook and YouTube pages for a FREE Solo Piano Concert.

Ilana graduated with a Master’s of Music in piano performance at Longy School of Music of Bard College; May 2017, under the direction of Leslie Amper. During her time at Longy she has performed at Pickman Hall, Sanders Theater at Harvard University, and the Dante Allegheri Society in Cambridge. She has collaborated with Longy's Side by Side El Sistema program and the Boston Cello quartet. Being involved with Longy’s chamber program, Ilana has had the privilege to work extensively with Robert Merfeld.

She has performed solo and chamber works for the master classes of Peter Serkin, Frank Levy, Denis Kozhukhin, Wayman Chin, Randall Hodgkinson, Roland and Almita Vamos, Ming Feng Hsin and Wen Qian, Jennifer Koh, and Dylana Jenson.
Recently Ilana embarked on a collaborative journey by co-founding, Table for Two | A Piano Duo, with fellow pianist Linda Chavez. The duo debuted in Graz, Austria at the Styriarte festival as winners of the Lunchkonzerte competition. They have also toured in Texas, Vermont, and Massachusetts. They have been invited to attend a Teaching Artist at the Lincoln Center in NYC, summer 2017.

She graduated with distinction, as a JN Andrews Scholar from the Andrews University Honors program and in 2014 she completed her undergraduate honors thesis, “A Composition Project: An Original 12-tone Fugue Modeled after J.S. Bach’s BWV 847” and was awarded a research scholarship from the Earhart Foundation Emerging Scholars Program. She presented the project at multiple conferences in the Michigan area. Ilana was a winner of the 2012 and 2014 Young Artist Competition at Andrews University, and performed MacDowell’s Piano Concerto No. 2 Larghetto Calmato and Brahms’ Concerto No. 1 Maestoso respectively, with the Andrews University Symphony Orchestra. She joined the JOMP faculty in July of 2017.